There are an endless number of ‘faults’ in golf; we could lose our spine angle, raise our head height at the wrong time, extend our knees too early, flip our wrists, have a backswing that is too flat (just to name a few). Everyone is always looking for the reason for hitting a bad shot; we are animals and it is in our nature to search for cause and effect – it was one of the driving forces for our evolution. But sometimes, in an attempt to find the cause and fix it, other ones pop up to take its place – as discussed in THIS. How many times have you played with someone who tops the ball and says it’s because they looked up too soon, only to keep their head down diligently next time and still top it. Ring any bells? Chances are they were looking at the wrong cause anyway, but even if they did find the right one, it would probably be replaced by another fault for the next shot. 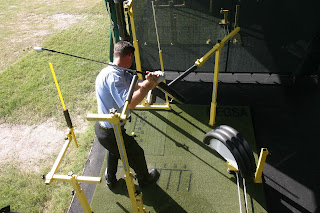 Talking specifically about the full swing, it would be much simpler if you put faults into just two categories – Strike and Direction. There could be a million and one different contributors within your technique to each of these faults, but wouldn’t it be easier to see this in simpler terms. Instead of fault fixing (a largely negative term), see it as progressing towards what is correct. Rather than working on getting rid of the influences to a fault, instead, work towards doing it (what you want to do) ‘more right’.

My mother used to have a nightmare that she would be in a house and windows would keep opening as someone was trying to get inside. As she would run over and shut one window, another two would open. This would continue on as more windows opened as one shuts. Fault fixing in golf can be a similar thing – as you fix the knee extension, your arms may start to collapse at impact to produce the thin. If you fix both the arms and knees, your spine angle may raise up through impact. Before long, you have 3 or 4 different things to monitor and you game has fallen to pieces. The human brain works better when it is given a goal to progress towards. Rather than saying ‘don’t do this’, it would be more preferable to say ‘do this’. So, let’s have a look at what we need to do in order to hit a good shot in golf.

Hit the ground in the right place 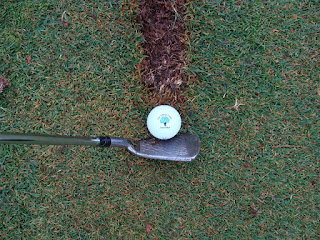 There are not many things that all golfers do the same, but this IS one of them. Every good golfer hits the ground in the right place – after the golf ball; this would be one of the greatest contributors to good strike. The clubhead will hit the ball first, then make contact with the ground ever so slightly after the position of the ball. Some players take a deep divot, and some ‘pick’ the ball of the grass. The aggressiveness that the player hits the ground is largely a personal thing, and is affected by many other factors; however, it is largely unimportant to good play. There are certain advantages and disadvantages to each style, but the best players know when to use both to their advantage. I will discuss this in more depth at a later date.


Hit the middle of the face 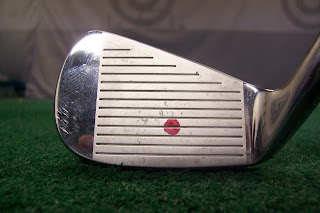 Again, one of the few things that all good players do consistently is to hit the middle of the face, or the sweet spot. Doing this will make the shot feel great, and will also send the ball flying long and consistent distances. If you strike the ground in the right place, as described above, there is a very good chance that the ball will strike the correct height on the clubface. All that is left to do now is to hit the ball between the toe and the heel of the club. It is important to understand also that, just like it is impossible to hit a perfectly straight shot, it is also very difficult to hit it bang on the middle of the sweetspot. Almost every shot you hit will be more of a toe shot or a heel shot to some extent. But, the better the player you are, the smaller the error. Just keep on working towards getting better at this skill.


Controlling the clubface and path


Clubface accounts for the majority of overall direction – up to 90% in some circumstances. If your ball is going too far to the right, you can improve the direction by getting the clubface ‘more left’ at impact. This may not be theoretically the best adjustment to always make, but it is a rule that you should understand nonetheless. 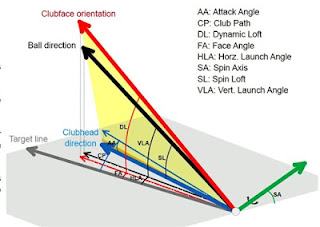 Ball flight can be as complicated as above, or as easy as the sentence below

In reality, direction is mainly a combination of swing path (swing direction through impact) and face angle (with some complicated other stuff I will talk about at a later date regarding heel/toe strike called gear effect). The rule to remember is this;

“The ball starts close to where the clubface is pointing at impact, and then curves away from the path”

So if your ball is starting straight at your target and then veering off to the right trees, it is highly likely that your clubface is aiming straight/slightly open at impact (causing the ball to start that direction) and your swing path is to the left (causing the ball to move more to the right). This curvature of the ball is down to the spin placed on the ball from a difference in path and face. The clubface is sliding across the ball making it spin more sideways (for all those technical junkies, it is tilting the spin axis of the ball).

But even if your path is to the left (or right), getting the clubface in a more appropriate position at impact can make that swing playable. If a player has a swing path that is very leftwards, a clubface that aims more left at impact can make this swing playable. My own swing has a path that is to the right, or in-to-out. For me, a clubface square to the target at impact is unplayable – so I set up with it more to the right. This may go against every book you have read on golf, but it is how every good player out there plays – there are very few tour pros who hit the ball with a square face, contrary to what you may think.

Theoretically, a neutral path and a neutral face at impact would be more consistent, and this should be generally a goal for most golfers. However, more experienced coaches will know that this doesn’t always stand true, for a million reasons. Some of these are physical, some psychological, some strategical. Players like to see a certain shape as they can feel it easier, and also tends to produce a more consistent mistake – a vital part to good play is knowing your mistakes.

Summary
So, in summary, work towards getting your shots better by identifying which of the above (and below) skills can you do better.  The skills are, once more;

Identification of what you need to improve is vital; you must have the ability to say after a shot “I could have done ‘this’ better”. I will be taking each skill individually and talking more in depth about it soon -how to identify it and how to improve it. This post has been a largely alternative view to improving your golf – looking at it in a more positive sense rather than what you ‘shouldn’t do’. This was a huge help to me personally – instead of having a long list of body position checkpoints to control, I only had a couple of things to really monitor and improve, which gave me a greater sense of control in my own game. As always, fault fixing can and does have benefits and should be part of a healthy practice regime, although understand the limits to it and experiment also with this approach. I personally prefer to ask what I need to do to hit a better shot, and work on doing that directly, although there are many ways to skin the cat of golf.