I would consider this idea one of the most basic in course strategy. Yet the more I coach, the more I am amazed at how even some of the more elite players I have coached don’t understand (or at least don’t use) this. I played for many years with a 25 yard hook, yet it never stopped me getting down to scratch. Yet I see players with 25 yard slices who complain that the reason they can’t lower their handicap is due to their banana ball. Well, if I could curve the ball 25 yards and still get the ball around in par, why are these people struggling to even break 100 sometimes, with the same amount of curvature? Obviously, many factors contribute to the overall score of a player, but one of the consistent mistakes I see is in the strategy, which I will address here. This topic could fill a book (trust me, it will), but I will just take one example here and highlight it.

The strategy concept I am talking about refers to where you should want your ball to land in order to balance out the risk and reward – your target.

What is your target? 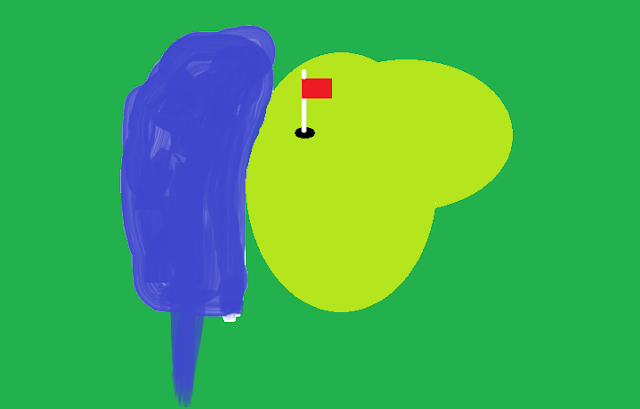 This is what we would describe as a ‘sucker pin’. If you have poor course management, it is likely that you will answer this with question by saying “The flag”. But in a lot of cases, this is the worst target you can have. It is often too aggressive a strategy to allow for consistently good golf. It may offer more birdie chances if your game is firing on all cylinders, but if you are playing average golf (which, by definition, you are more likely to be playing), it will cost you more shots than it earns.

You have to be realistic about what is achievable with your shots. Even a top professional golfer averages around about 10 yards away from the flag with their approach shots. This could be 10 yards left or right, giving a 20 yard circle. So even the top guys don’t hit their target all the time, they just get ‘around’ their target more often. For this reason, you should think in terms of your shot circle. Below is the same flag, with a 20 yard shot circle overlayed. 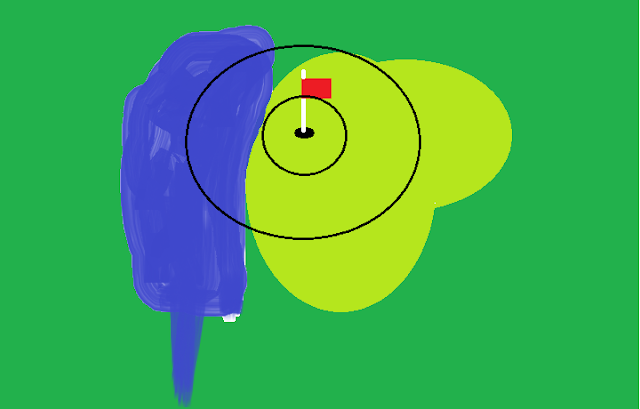 By going aggressively at the flag like this, a player believes that they are going to make more birdies. But even for a top professional golfer, if they manage to pull off a great shot and knock it to 7 feet, there is still only a 50/50 chance they will hole the putt (based on tour statistics); a shot in the water costs them a whole shot. The risk outweighs the reward.

Imagine playing this hole 10 times. If you were to hit half of the shots in the water, it would cost you 5 penalty shots, not to mention you would have to get it up and down from wherever you dropped it; this is a big risk. And the reward? The other half of your shots would land on the green and be relatively close. But when you consider that the average player is not going to hole many of those putts for birdie (even if they are around 10 feet from the pin), the reward is too small. You may get 2 birdies at best, but at the cost of 5 penalty shots and 3 extra shots trying to get it up and down (taking into account the average short game stats).  The math doesn’t add up, and on average you will end up worse off.

Now let’s overlay a more appropriate strategy onto the green. 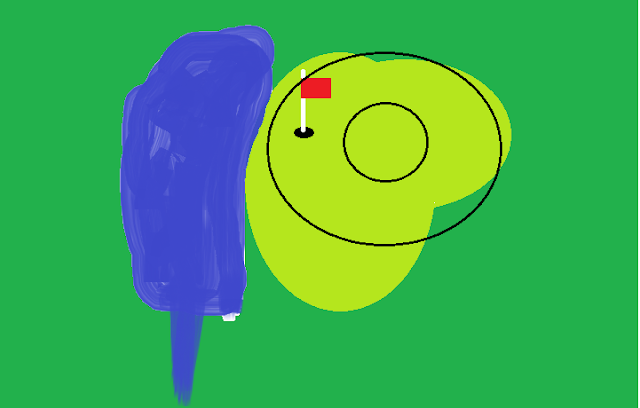 In the above picture, our target is to the right of the flag (the centre of the circle), taking the water out of play (barring anomalous poor shots). Now, not only do we almost eliminate penalty shots, but we still have good birdie chances when the ball creeps into the left portion of our shot circle. Sure, aiming away from the flag is not the most exciting way to play, but your scorecard will thank you. You can still make birdies this way, and a lot less bogeys and doubles.

The flag is not your target. Greenkeepers will put the flag in silly positions to ‘sucker’ the aggressive players. A good player has the ability to swallow their pride, pick a target which is away from the flag and toward a more appropriate position which, if they were to repeat 10 times, would maximise their performance in terms of score. Pick a target which suits your shot circle; the bigger your shot circle is, the further away from the flag (and water) you target should be. In extreme cases, it may even mean having a target which is off the green, such as a safe run off area from the green.

Next article, I will address where to aim. And yes, this is different to what we have discussed.
Posted by Unknown at 7:26 AM