This post includes a lot more technical detail than I normally talk about. I am going to discuss a topic that will hopefully spark some good quality discussions which can further our understanding of the golf swing, and specifically impact. I am also going to, in this and future articles, suggest the practical implications of this information.

Full credit goes to Chris Como for this information. He is currently doing ground breaking research on this topic and was kind enough to share information with me, which I hope can help some players and teachers. Also, Sasho Mackenzie has done some modelling on this topic and, as I understand, has worked with Chris on proving this theory.


If you look at the below picture, it shows a pendulum swinging back and forth. Just like any circle with a fixed hub, it will have a very small ‘low point’, marked out in green (the reality is the lowest point of the swing is infinitely small). Hopefully, this is simple to understand. 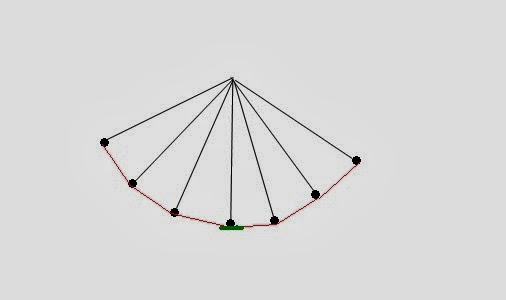 If a pendulum (or club) is swinging from left to right across the screen, we could speed up the pendulum by pulling the end of the string (or club) in the direction of the green Arrow. Forces want to line up in the direction of the pull, so the bottom end of the pendulum will try and line up with the dotted line by speeding up towards it. This has been coined ‘parametric acceleration’. 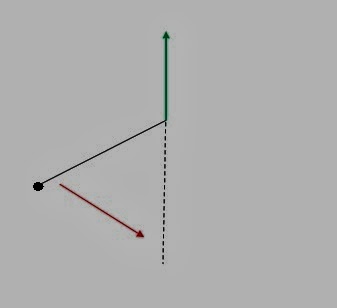 If we are pulling the top of te pendulum in the direction of the green arrow, not only does it speed the bottom of the pendulum up, but it will raise the overall height of the pendulum (as it is being pulled upwards).

But the act of pulling upwards whilst the pendulum head is still moving downwards neutralises each other. The result is a longer ‘low point’ in the arc of the pendulum swing. This is highlighted in red. 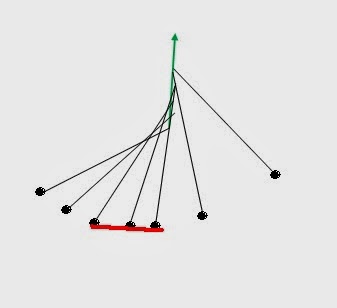 If we are to apply this to the golf swing, look at the below picture. The pendulum is being swung along the hand path, which is moving down and forwards, before moving forwards and upwards. This dramatically increases the speed of the clubhead, and also creates a much longer and shallower low point. 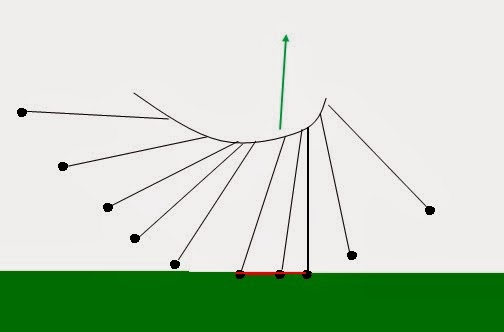 What are the advantages of this?

2.     More speed. The pull in the direction of the green arrow will speed up the clubhead, offering a mechanical advantage (much more speed with for the amount of physical effort applied).

3.   More compression. The player will be able to hit the ball with a more forward leaning shaft position (relative to swing direction), allowing the club to be delofted, hence lowering spinloft and helping the player hit the ball further for the same swing speed. Without this pull away from the ball, the player could only achieve this decreased loft by having the ball further back in the swing circle. The problem with this is that the player will have an increased angle of attack (steeper) and so spin loft (and hence compression) may not be improved. Also, the player may hit massive divots which need to contact the ground in the right place more precisely, lowering margin for error.

4.   Longer line of compression – with these moves, the angle of attack and dynamic loft through the impact interval will remain more constant (than without), offering a longer line of compression. I am not sure we fully understand what this means yet, in practical terms. But it could offer potential benefits to consistency of distance control.

So, is there evidence of professionals doing this?

Whilst 2D video is not the best at looking at these types of things (due to something called parallax, on top of the fact that the swing is a 3D motion), we can see, in the below video, a visual representation of this movement from front on. Please understand, there will also be an inward component to this move (as in the grip of the club being pulled away from the ball to target line). But, I will talk more about that in coming articles.

You can see clearly the hands raising through the hitting zone. Even more so if you look at the coupling point (the point where the two hands meet).

So, if an optimal hand path moves up and inwards (towards the golfer), we need to understand how to do this – or what are our options?

The first thing to realise is that, if we are going to be pulling upwards, at some point we have to get the coupling point low enough so that we have ROOM to pull up without topping the ball or missing it altogether. Where beginners go wrong is that their hand path through impact is usually too high to begin with, so any pulling up and in would result in a top shot. So usually, they don’t (or do and top it). Or, they move the hands down towards the ball through impact and have major struggles with low point control/consistency. 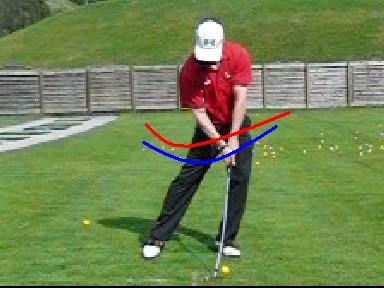 In the above picture, the red and blue lines represent hand path through the hitting area. The red line is that of an amateur, with the lowest point of the hand path being much further back (opposite right foot) and also being too high through impact. The blue line is more that of a better player, with the hand path being lower down. It also has its lowest point more opposite the right leg, and raises more sharply. This is a good visual to imagine when working on this concept.

Why is the professional’s hand path lower down? In almost all professionals, you will see what we call in the industry a ‘power squat’. This is where the player will drop in height. Often, this occurs during the transition between backswing and downswing, but some players do it earlier (during the backswing) and some do it a fraction later.

Take a look at the pictures of Tiger below 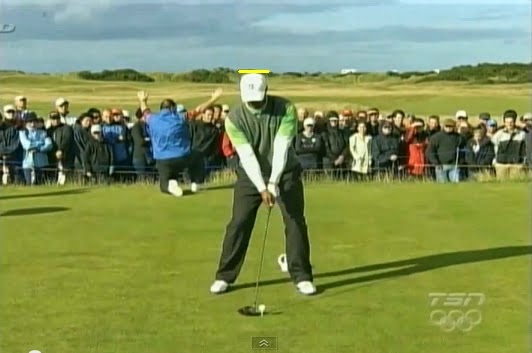 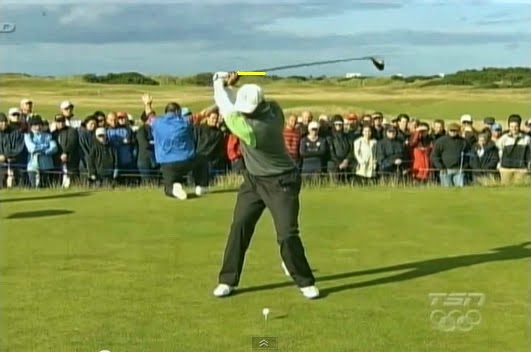 We can see in the above picture (pre transition) that Tiger's head has already significantly dropped in height. 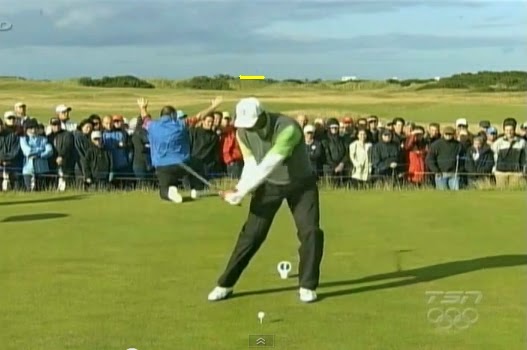 Wow. That's a foot of height loss as he is coming into impact.

Also, see the below video with an iron to see the same basic movements. From 33 seconds on, we can see the head drop in height to create a hand path which is almost down to his knees.

This drop in height is created by a drop in hip height, and usually an increase in forward flexion of the spine. 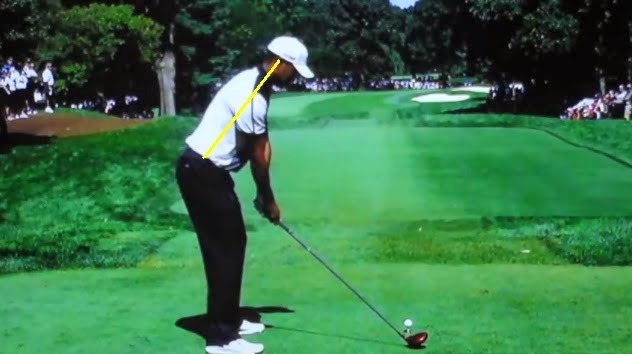 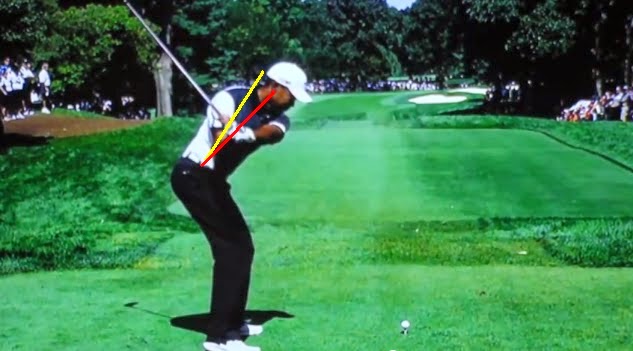 Now we have the hand path low enough, we have to raise it through the hitting area. For the best players in the world, the hand path is at its lowest point around the area of the right thigh, before it moves up and in. So, how do we get the hands to move up and in? We have a few options.

Out of our 3 options, with tour players, we more commonly see 1 and 2. However, This below video of Jamie Sadlowski shows him exhibiting all 3. For those of you who don’t know, Sadlowski is a World Long drive champion who has hit the ball 445 yards.

Through the hitting area, he demonstrates his sternum getting further away from the ball by going both upwards and backwards. With a driver, this movement will produce a more upward angle of attack on the ball, allowing for maximum distance, as well as the benefits described from moving the hand path up and in. The backward component (if excessive) may lead to problems with iron strikes, depending upon several other variables. Jamie also achieves moving the sternum further away from the ball via his hip height increasing through impact, created by literally jumping off the ground through leg extension. 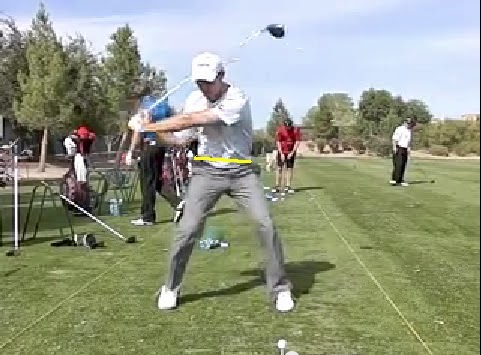 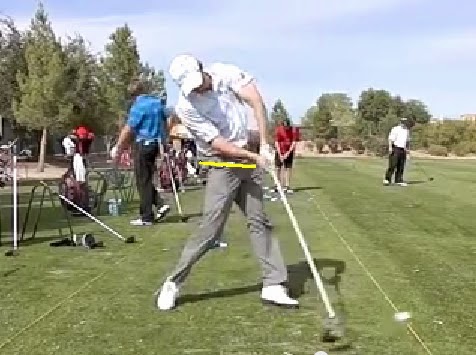 Jamie also demonstrates his left shoulder moving dramatically upwards through impact. Moving the head backwards has helped create room for this, and so has having his spine tilted away from the target.

Point 3 is easy to see. Look how much his lead arm has bent through the hitting zone. This has helped Jamie to raise the handle away from the ball even more, allowing him to release his insane amount of lag right around impact – creating insane amounts of speed and distance.

The irony of most of this is that, the movements which produce a good hand path have often been frowned upon. Dropping your height and jumping up through impact, for example. The theory has been that, the less moving parts we have, the more consistent we can make the movement. Whilst this may be true logically, in a biological system which requires ‘margin for error’, more moving parts and more degrees of freedom may offer several benefits over something which looks prettier, more symmetrical and ‘tidy’. It is no surprise that Tiger Woods exhibits a lot of the traits described, and that he has also been one of the best (if not THE best) iron players in the  world over the course of his career, as well as a long hitter of the ball. Again, ironically, these good traits he has were almost taught out of him. Luckily for him, his body never really listened to his training, and he continued with what he did naturally.

So, in summary, if you provide an upward pulling force through the hitting area, you can not only create speed through parametric acceleration, but you create a longer low point (for more consistency) and the ability to hit the ball with a lower spinloft (more compression). You will also create a longer line of compression. All of these are good things.

Also, more degrees of freedom and more moving parts can actually be a good thing. Most teachers try to be too restrictive. Whilst this can work, and there are often times I do it myself (if I deem necessary), the idea that less moving parts = more consistency can be taken too far.

What amazes me the most is how our bodies are so intelligent. Tour pro’s have found these macro movements without being told about them, and often in spite of being taught the complete opposite. It also amazes me how the human body can organise so many moving pieces, all moving in different planes of motion, at different speeds, rates of acceleration etc, yet combine them all to produce the impossible; a ball which flies 300 yards down the fairway. Just a couple of degrees out and the ball is offline, yet we manage to do it on (almost) regular occasion. Without going too much into the theory of the uncontrolled manifold hypothesis, it is safe to say that we, as humans, are pretty damn amazing at organising all of these complex movements into one harmonious symphony. We should try and tap into our self-organising skills more often.

I must mention Jon Hardesty for our discussions on this topic. It is also right of me to mention Chris Como and Sasho Mckenzie for their information on hand path, and also Brian Manzella for consistently bringing hand path to my attention.
Posted by Unknown at 2:09 PM