The long title might sound scary – but I will simplify it. Basically, it is messing around J

Skill is the ability to carry out the demands of the task to produce the required performance. For example, you could be skilled in hitting the ball into the fairway, be it with a big cut, or a massive draw, or a more neutral flight (or combinations). Having the skill to be able to vary those flights/control the amount of curvature is a subset skill of this. A process skill would be to be able to control the sweet spot of the club through the swing, and be able to strike the ball with the part of the face you desire (hopefully the middle, but having the ability to vary it at will is also important).

Perception action coupling (PA coupling) can come in many forms, but I am going to talk about the ability to match your perception of events with your action, or controlling action through varying perceptions. For example, when you strike the face, are you hitting the ball where you are intending to. If you aim to hit the middle of the face, is the ball actually coming from the middle? Also, do you have the ability to change your perception if there is a difference between your PA coupling? An example of this would be a player who is striking from the heel when they desire to strike from the sweet spot. The Perception is ‘centre of the face’ but the action is more heel biased than the perception. Does this player then have the ability to move their perception more towards the toe in order to move the action more towards the middle? Whilst not optimal (ideally we would like to have our PA coupling match up perfectly), it is an important ability to develop, as day to day fluctuations in PA coupling mean we often have to use whatever form of focus which gets our performance how we desire. I have played some great rounds when my strike pattern has been more heel biased than my desired. But I get through it by simply shifting my perception more towards a toe strike, so reality (action) becomes more centred. This ‘offset reality’ can be quite strange, unless practiced. And, as golf is largely a game of managing your broken state, it is an important quality to have if you are to play consistently high level golf. You are mistaken if you think there will be one day where everything just comes together, the swing is built and now will function perfectly. It doesn’t and never will happen. Most of the time you are playing an act of damage limitation and constant self-correction. 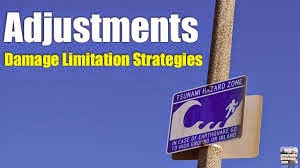 “A more recent hypothesis propose that the central nervous system does not eliminate the redundant degrees of freedom, but instead it uses all of them to ensure flexible and stable performance of motor tasks. The central nervous system makes use of this abundance from the redundant systems instead of restricting them like previously hypothesized. Uncontrolled Manifold (UCM) Hypothesis provides a way to quantify the muscle synergy.[8] This hypothesis defines "synergy" a little differently from that stated above; a synergy represents an organization of elemental variables (degrees of freedom) that stabilizes an important performance variable. Elemental variable is the smallest sensible variable that can be used to describe a system of interest at a selected level of analysis, and a performance variable refers to the potentially important variables produced by the system as a whole. For example, in multi-joint reaching task, the angles and the positions of certain joints are the elemental variables, and the performance variables are the endpoint coordinates of the hand.[8]

This hypothesis proposes that the controller (the brain) acts in the space of elemental variables (i.e. the rotations shared by the shoulder, elbow, and wrist in arm movements) and selects in the space of manifolds (i.e. sets of angular values corresponding to a final position). This hypothesis acknowledges that variability is always present in human movements, and it categorizes it into two types: (1) bad variability and (2) good variability. Bad variability affects the important performance variable and causes large errors in the final result of a motor task, and a good variability keeps the performance task unchanged and maintains successful outcome. It suggests that the brain only works to decrease the bad variability that hinders the desired final result, and it does so by increasing the good variability in the redundant domain.[8]”

So, as the last paragraph describes, there is always variability and fluctuations in human movement. We can have good and bad variability. Our aim is to increase the good variability. As golf is also a game played on varying slopes with varying lies, encouraging variability is important. Changes do not happen in isolation, so we have to improve our ability to understand how one variable will affect another – EXPERIENTIALLY.

I have recently been working with a scratch handicap player (secondary to my teaching partner). One of the things I have added to his practice routine are some variability drills which develop all the above qualities. Take a look at the below video, followed by a description of each.

This drill involves hitting balls from varying heights relative to feet. So ball one is slightly below the feet, and then we have a few from tees and ground level. The aim was not only to successfully strike the ball, but to get it within a target of 20 yards (average green size). There was a clear improvement in his ability to match all variables successfully after practicing this drill for just 5 minutes. His technique responded to the demands of the task (self-organising behaviour), and was done with the target as a primary focus in order to improve PA coupling of target/result (encouraging course transference of skill). It is a variability practice drill because it is aiming to do the correct things (hit the target/control the swing circle) but in varying ways. It is also a random practice drill because the shot is different every time. To make this a block/variability drill, you could practice just one tee height more than once.

The skill being developed here is swing circle control. In order to successfully strike the ball, the player needs to control both the height and position of the LOWPOINT. They also need to control their D-Plane variables (consisting of the BALL FLIGHT LAWS) in a variable way, as changing the low point position will have an effect on these.

The goal of this drill is to be able to strike the centre of the face, but the caveat is that you must start by either addressing the ball from the heel or the toe. Our player found this massively difficult at first, but quickly learned not only how to re-find the sweet spot from less than desirable starting positions, but he was able to hit the ball within his 20 yard circle. No technical instruction was given; the player self-organised technique through the demands of the task.

Whilst conducting this drill, the player is subconsciously learning how variables affect each other. For example, his first few attempts at the toe address position resulted in several thin shots, before the player learned to put his body in a more desirable position to be able to successfully strike the ball. Even if this player is to never do this on the course, he is learning valuable proprioceptive abilities which can carry forwards to other, more stable swing styles. By challenging a skill beyond what is required, it is forced to grow and improve, just like muscles grow in the gym when challenged with weight training. The player is also developing an ability to control where he hits on the face and improving PA coupling of strike.

This drill develops the player’s ability to control and sense fluctuations in path and face relationships, as well as building and improved ability to hit the target. The player is also subconsciously building a tool-box for self-correction – if they are able to move the ball right and left at will, they can more easily calibrate a neutral ball flight if desired. 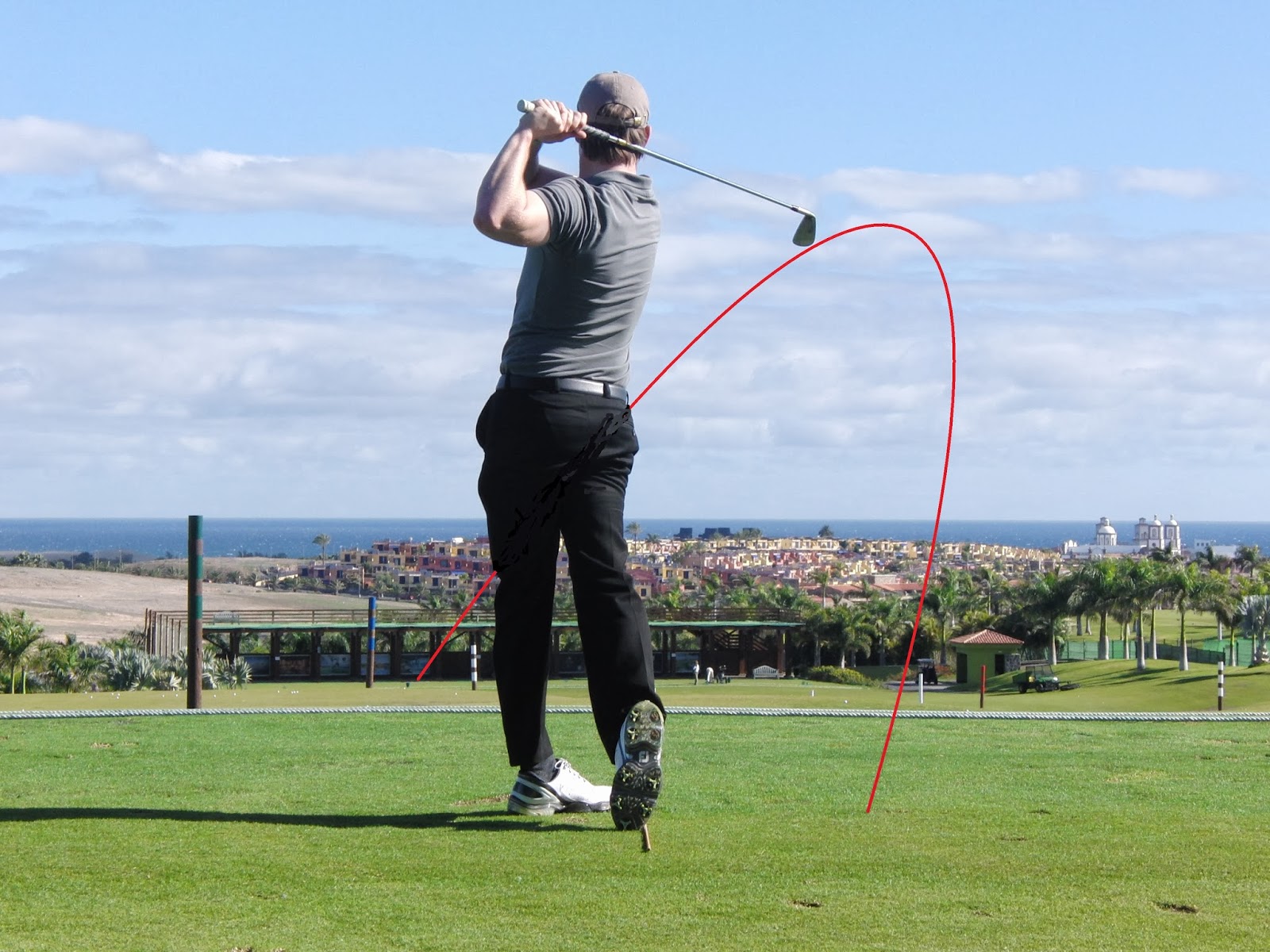 Again, we can see huge variances in his swing technique, but the player is conducting those changes without awareness (they are an ingrained skill for this player and are subconscious/autonomous). But the movement is responding to the intent of the player. As the player’s intent was on the shape of the shot and the target (further heightened by the fact he had to try and do all of them in a row successfully), the player is building an improved PA coupling of target/action.

When we encourage variability in practice (in similar ways to this), we learn a multitude of different skills. Some of them are direct - such as the ability to shape the ball around a tree. Some are indirect – such as the ability to control the sweet spot / low point /task demand couplings. This not only applies to varying lies (as most people think) but even helps us improve our ability to hit off a flat lie.

Variability in practice allows us to develop better sense for where the club is in space which can lead to auto-correction. A player who has sensed and practiced being out of a desired position is much more likely to be able to correct themselves if they have already experienced it. Whereas, a player who practices with the same club over and over to the same target will experience less of this, so when it happens on the course, they will have less ability to recover. 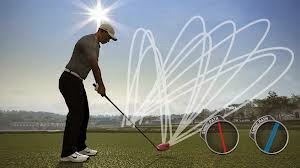 Applying intentional variability (even if it is intentionally bad) can also improve the good variability we desire. A player who has the ability to hit the toe and the heel at will (differential practice drill) can more easily calibrate the desired the result, even from varying movements.

It is worth saying that the player found these drills incredibly fun and engaging. He felt much more challenged and enjoyed the act of working out how to do the new task. This player is very advanced, and these are relatively advanced drills (I have a full spectrum of much more/lesser advanced drills), but we can all use a little bit of this in our training regime.

Although these types of drills can cause short term interference (this is off-season for the player – a time to expand skill sets), try not to be frightened of doing these. You won’t ‘mess up’ your swing as most people believe. The mantra of ‘perfect practice makes perfect’ is dying hard with new science in motor learning emerging. Encouraging variability can be a great long-term asset, improving feel, awareness, skill, proprioception, self-correction, auto-correction (subconscious version of self-correction) and toolboxes for self teaching.

Think about the other skills in golf and how you can apply these principles to your training to really maximise your learning.
Posted by Unknown at 6:07 PM