I have always had a pathetic amount of swing speed. As a junior, all the other kids much younger than me used to whack it 40 yards past me. One of the deciding factors on whether I pursued a career playing professionally or go into teaching happened when I played the Welsh amateur. I got beat 6 down with 5 to play. He hit is 70 yards past me (230 to 300), and was going in with wedges to par fours I was struggling to reach. Please, shed a tear for me.

I recently tried the new Taylormade driver. I didn't see my clubhead speed, but it was around 100-105 mph max. I rarely go above 103mph. In the test I describe here,my clubhead speed only averages 102.5 max, which would be dead last on tour.

My highest average clubhead speed of 102.5 would be dead last on tour.
By a whole 1 mph :(

But, there is hope

Although my clubhead speed is relatively low, during the Taylormade testing, I managed to get one of the balls to go 316 yards. This is definitely further than I normally hit it. We looked at the launch numbers, and the launch was higher than normal with lower spin (17.6 deg launch, 1400 spin) which is the idea behind their new head design. The testers said I was the most efficient driver they had tested, and had never seen anyone with my girly speed get over 300 before. They put it down to my angle of attack. 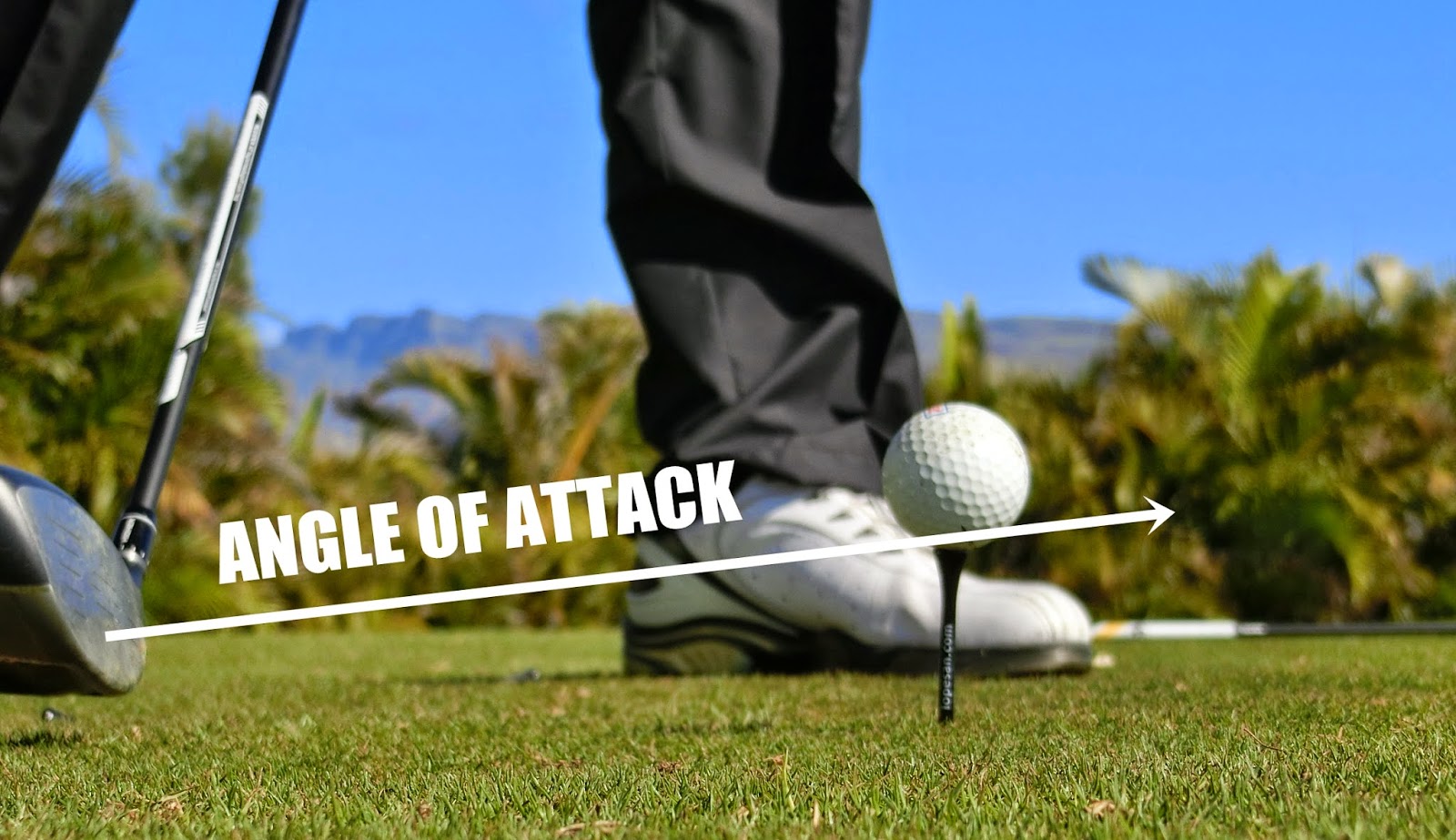 Angle of attack is basically the vertical path the club is taking through impact - whether you are hitting down or up on the ball, and by how much. Most players fall between a -3 to +3 range (hitting down or up by 3 degrees). My Angle of attack,or AOA, was +9 for that particular shot. I must admit that I was trying to get it this high, as I know from experience I get my best carry distances with this swing.

But this got me thinking, how much of an effect does AOA have on distance? So, I decided to do an N=1 experiment. Please understand, there are a lot of variables which go into creating distance. This test simply looked at what happened when I changed MY angle of attack using the same driver.

Please note, for the testing, all shots were normalised, meaning that wind and air temperature were not a factor and everything was standardised. Altitude was set at sea level.

I decided to start with a +5 AOA, as this would typically be my norm for me. After 10 shots, here were my results. 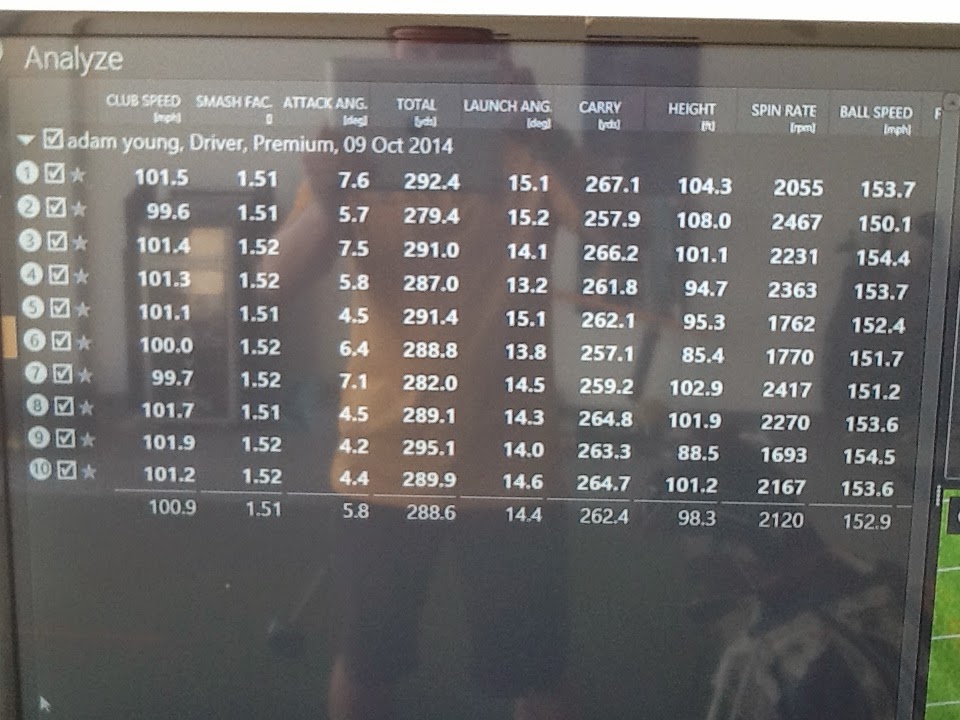 As you can see, my average clubhead speed was 100.9 mph. My average Angle of attack was 5.8 degrees upwards. This produced an average distance of 288.6 yards, with a top distance of 295.1 yards. Carry distance was at 262.4 yards in the air.

Next, I tried to level out my swing. This would be the typical average AOA on tour for men. 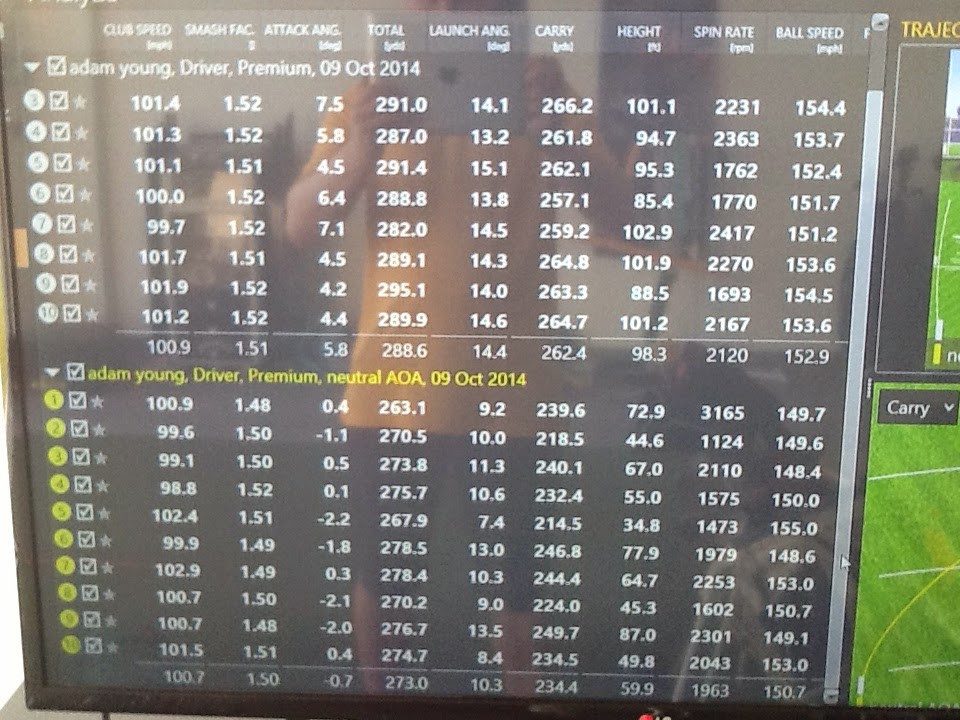 It is very common for us as teachers to see average players with very negative angles of attack. This means the player is hitting down drastically on the ball. It is not uncommon for me to come across someone hitting 8 degrees down with a driver. Well, let's look what happened when I did the same. 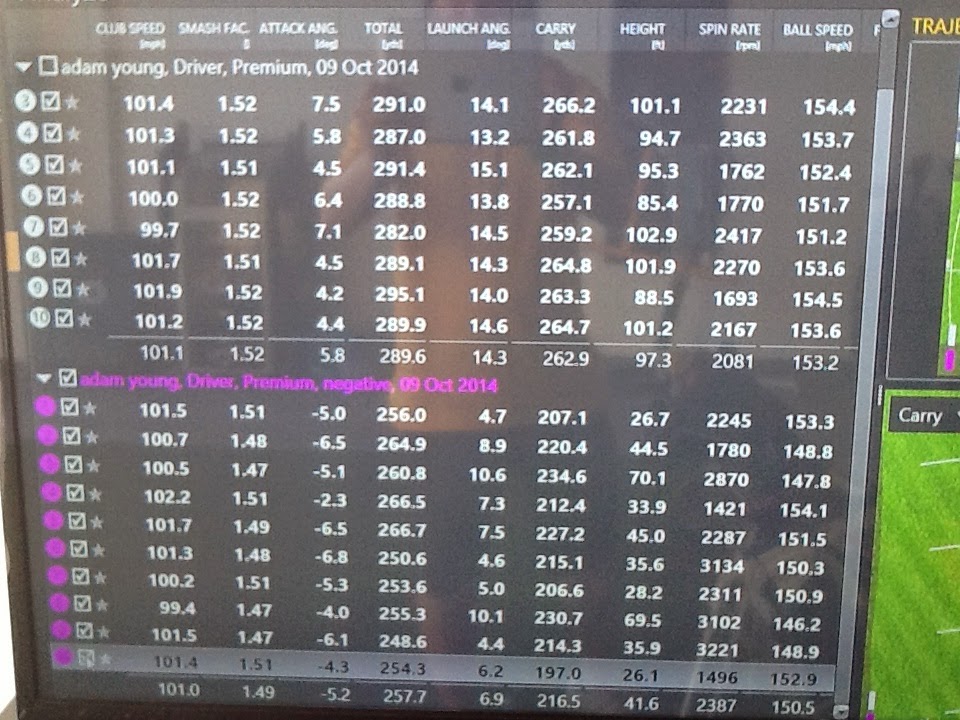 Now, the purple numbers represent the negative AOA. On average, it was a 5.2 degree downward blow. This is actually very common amongst amateurs. The distance achieved with the same swing speed now dropped down to 257.7 yards, with a longest drive of 266.7 yards. Carry distance dropped off significantly, averaging only 216.5 yards.

So, going from a -5.2 AOA to a +5.8 AOA resulted in an extra 31.9 yards total,and an extra 46.4 yards carry distance. This was with the same swing speed of 101 mph. There are some problems which I will address in a moment, but first, let's get EXTREME.

I decided to have a look at how far the ball would go if I hit as much up on it as possible. I went beyond the limits of most people, into the ranges of long drive champions to see how far you can get with maximum efficiency of a powder-puff swing speed. Below are my results.

Now I have gone to a crazy 8.1 degree positive AOA. That is a full 13.6 degrees difference in angle of attack. In fact, if you look, you will see one AOA of +11.4. While it is certainly not realistic to make this kind of change to a player overnight, understand that I did this in a matter of seconds, from one swing to the next.

With this silly amount of positive AOA, I managed to get an average total distance of 295.5 yards, a maximum distance of 305.1 yards, and a carry distance of 272.4 average. This was with a slightly higher clubhead speed (1mph) and a resultant higher ball speed. But I seemed to find it easier to create this higher speed without any extra effort. I theorise that the positions I was using to create the positive AOA also helped me use the ground better.

The results in table form

Below are the results in a table for visual ease

So,we can see that potentially, the same person may gain 56 yards of carry and 38 yards of total distance. That can mean the difference between going in with a Pitching Wedge instead of a 6 iron.

Now, most of the swing speeds were very similar and the tests varied by only 1.5 mph swing speed total. However, the highest swing speed also had the highest smash factor (energy transference into the ball). Whilst this could be a direct result of the different technique, it may also be a confounding variable.

For this reason, I also decided to adjust for ball speed (which will counteract any benefit of clubhead speed and smash factor) and also for spin rate, by using only results which had spin rates within 10% of each other. I consulted Dave Tutelman on how to normalise for ball speed. He had this to say

"Let's assume that the driver is well fit to the golfer. (That means that launch angle and spin rate are proper for the golfer's clubhead speed, AoA, wrist cup or bow, etc.) Another assumption is central enough face contact to get a smash factor close to 1.5. Under those conditions:*** You get about 2 additional yards for every additional MPH of ball speed."

It was also interesting that I created more speed with the technique which allowed me to hit more upwards on the ball. A subsequent increase in smash factor shows that this extra speed was also more effectively transferred.

The swing technique efficiency is worked out by dividing total and carry distance by the swing speed. We get the following values.

What about the physical ball flight efficiency? What did the different AOA's do on yards/mph of ball speed?

So, even when we look simply at the ball distance per mph, we still see a positive correlation between increasing AOA and increased yard per mph. This takes smash factor and clubhead speed out of the equation.

In this N=1 experiment, increasing AOA had a positive effect on both total distance and Carry distance. It had a more beneficial effect on carry distance, offering a whopping 55.9 yards extra carry. This is positive news for a lot of people, as it offers hope that we can make massive strides in our distance even if we don't hit the gym every day for a year. The swing changes took me less than one swing to make.But, if I am honest, it took around a year before I went from comfortably around -3 to being comfortable around +5.

It is worth noting that I used a Callaway 8.5 degree head with a stiff shaft. It is likely that, with the steeper AOA's, a more lofted head would have performed better, especially regarding carry distance. Although, it is also worth noting that the most negative AOA also had the highest spin rates overall.

So, why did this positive AOA go further? Well, the launch angle increased dramatically. With the +5 AOA, launch angle was 14 degrees. With the -5 AOA, launch angle was around 8 degrees. Sure, we could increase the loft on the club to launch it higher, but that would also increase spin-loft and cause a drop in ball speed and increase in spin rate. I think, in order to further maximise distance, using the higher AOA and using a club with less loft would do the trick,as it would spin even less. My furthest shots with the +8 AOA were also the lowest spinning shots.

There is also the question of accuracy. I am not lying when I say that I actually performed better with the +5 AOA, and second straightest with the +8 AOA. The more negative the AOA, the worse I performed in both distance and accuracy. Although, it has to be said that I practice more often with a +5 AOAand least often with a -5 AOA.

Everyone may be different, and some may perform better with a more negative AOA. not only does what you have ingrained matter, but how your body is mobile to move will also make a difference. The technique I used to create the +8 AOA wont even be possible for many. While there are many ways to create this positive attack angle, I feel that my way is best for me personally. If you would like to see the swing I used,  look below

If you liked this article, share it by clicking the links, and like my facebook page. I have lots of exciting things coming up, so stay tuned.